skip to main | skip to sidebar

Busan Metropolitan City launched a center to host a variety of services for its citizens. Operating like an app store for developers, the Busan Mobile Application Development Center (BMAC), marks the first phase of their deployment of Smart+Connected Community (S+CC) services -- in collaboration with Cisco and a local service provider, Korea Telecom (KT).

The plan is part of the Busan Green u-City (ubiquitous city) blueprint, which is in line with the national agenda to support environmentally sustainable economic growth in the country.

Busan, a bustling city of approximately 3.6 million residents, is located on the southeastern tip of the Korean peninsula. The second-largest city in South Korea, Busan occupies about 300 square miles (766 square kilometers), 8 percent of the entire Korean peninsula. Busan also has the country's largest container-handling port (fifth largest in the world) -- thanks to its accessibility from the Pacific Ocean, deep harbor and gentle tides.

Cisco Korea and Cisco's Internet Business Solutions Group (IBSG) contributed to this blueprint, which includes the rollout of S+CC services such as urban mobility, distance learning, energy management, and safety and security by 2014.

The aim is to transform the way of life for Busan citizens, improve city management, and generate new economic growth in a sustainable environment.

"Busan is an advanced city and among the first to adopt the u-City concept in Korea. Because of its ICT infrastructure, Busan has decided to move faster toward becoming a green u-City. We are pleased to be able to collaborate with Cisco due to its rich experience in a variety of smart city projects," said Hur Nam Sik, mayor of Busan.

BMAC is phase 1 of Busan's Green u-City blueprint. The center will be based on a platform-as-a-service (PaaS) approach, in collaboration with KT and Cisco, for application developers to test and host city services.

Phase 2 will see the rollout of software-as-a-service (SaaS) managed cloud services, delivered by KT and powered by Cisco, such as billing automation, content management and document management by 2012.

Phase 3, planned for 2014, will see these services widely available to all citizens.

BMAC is built on a platform powered by the Cisco Unified Computing System, the Cisco 4500 backbone and SAN switches.

Busan expects the BMAC to act as a catalyst for app developers to make use of public data provided by Busan Metropolitan Government, which will allow them to develop innovative applications that will appeal to the general public and help improve the quality of life.

By providing a shared services development platform and creating an ecosystem for software developers, Busan expects to see new job opportunities in knowledge industries. Busan also plans to have these developers lead phase 2 of its blueprint, the delivery of S+CC cloud services.

Theoretically, all types of organizations should be predisposed to consider the transition to managed cloud services -- due to the numerous anticipated benefits. However, based upon the results of recent market research in the United States, it now appears that some sectors are much more likely to be part of the growing early-adopter movement.

International Data Corporation (IDC) announced the findings of a new market study, which forecasts that from 2009 to 2014 the U.S. public IT cloud services revenue will grow 21.6 percent -- rising from $11.1 billion to $29.5 billion.

According to IDC's market assessment and forecast, the professional services, communications & media, and discrete & process manufacturing sectors will drive the greatest market adoption -- generating the most public cloud services revenue.

Broad Appeal of SaaS Offerings Will Continue
IDC believes that the professional services market, in particular, will be the primary beneficiary of increased public IT cloud service usage -- partly due to the multitude of information-dependent midsize companies that will adopt Software-as-a-Service (SaaS).

Other findings from the IDC market study include:
"While the healthcare vertical will represent less than 5 percent of this market's total revenue in 2014, it will experience a high compound annual growth rate of nearly 23 percent through the forecast period. Despite serious concerns about privacy, current healthcare reform and the rise of connected healthcare will lead providers to the public cloud for specific functions such as collaboration applications," Ms. Clarke explained.

According to the IDC definition, public IT cloud services are browser-based and are available to any person or entity. They are off-premise and do not require any dedicated, application-specific, or proprietary client-side hardware or software to support access.

Public and Private Clouds for the Enterprise

Telecommunication service providers will likely consume their own cloud services. After all, every organization can gain something from the proven benefits of infrastructure and application out-tasking. However, their primary role will be to implement and deliver the services that their end-customers will seek from public, virtual private, and hybrid clouds.

That said, service providers must be prepared to address customer concerns ranging from policy compliance, to end-to-end security, to quality of service management, and to technical customization. They must be able to deliver a flexible range of functionality, service levels, and payment models.

However, these organizations often require a higher degree of control over their data, applications, and systems than current public clouds allow. At scale, a private cloud offers the efficiency and agility of a public cloud -- without the loss of control.

Still, the IT services that a pure private cloud can offer are often limited to what internal IT can develop or deploy. This is where managed cloud service providers can add value.

Gartner recently shared their top technology predictions. They said that increased transparency -- and the need to drive business value -- are bringing disruptive change to IT organizations in 2011 and beyond. One of their key findings: cloud computing will enable many organizations to exploit internal capabilities to establish new business service revenue streams.

Other informed industry analysts share a similar point of view.

Businesses are increasingly moving their computing and collaboration applications to the cloud, and their shift in IT spending reflects that change in behavior. A recent market study by In-Stat forecasts cloud computing and managed hosting spending by U.S. businesses will surpass $13 billion in 2014, up from less than 3 billion today.

“Although spending across all sectors and size of business is projected to grow, there are some segments where growth will be staggering,” says Greg Potter, Research Analyst at In-Stat.

Apparently, based on In-Stat’s assessment, the professional services and healthcare verticals will see the largest growth in spending on cloud computing services -- increasing at a rate of over 124 percent between 2010 and 2014. 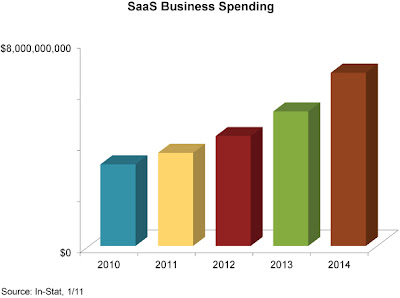